Warning: Use of undefined constant MK_DEV - assumed 'MK_DEV' (this will throw an Error in a future version of PHP) in /home/fisheries/public_html/wp-content/themes/jupiter/bbpress/bbpress-functions.php on line 145 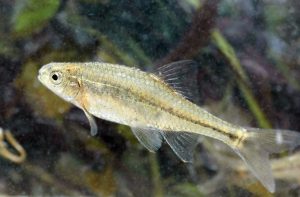 The 2015 Presidents Fishery Conservation Award was presented to the Oregon Chub Team. In 2015, the Oregon Chub became the first freshwater fish species to ever be delisted under the Endangered Species Act.

Below is a Fisheries interview with AFS member Paul Scheerer, project leader with the Oregon Department of Fish and Wildlife (ODFW)–Native Fish Investigations Program. He has worked with ODFW for 24 years with a focus on describing the status, distribution, seasonal movements, and life history characteristics of Oregon’s native non-game fishes.

Past president Bob Hughes says, “This project was a decades-long labor of love by some for a little unexciting fish to others.” Why is it worth so much money and time to recover the little Oregon Chub – a fish most people do not even know exists? The Oregon Chub Oregonichthys crameri has been described as an indicator species of the health of Willamette River off-channel floodplain habitats. The work we have done to protect this chub has benefited countless other species of fish, birds, amphibians, and mammals that also depend on these off-channel habitats, including but not limited to, salmon and steelhead Oncorhynchus mykiss, otters, deer, elk, beavers Castor canadensis, western pond turtles Actinemys marmorata, red-legged frogs, herons, shorebirds, and ducks. The collective effort by a very strong public-private partnership in the Willamette Valley clearly demonstrates that listed species can be recovered and delisted in a highly populated, working landscape. This illustrates one of the rare success stories for the Endangered Species Act (ESA), which just turned 40 years old last year. It is important to document success stories to show that the ESA is working and justify its value.

Why did you become interested in Oregon Chub in the first place? My career focus has been on assessing the status, protection, and recovery of Oregon’s native nongame, often endemic, fishes, so I was asked to lead the monitoring effort of the Oregon Chub when biologists became concerned about its status—prompted in part by an Oregon State University study in 1989 (Todd Pearsons and Doug Markle), where historical chub locations were resurveyed and chub were only found at a handful of the 29 historically documented locations. This study prompted a proposal to list the species under the ESA and develop an interagency Oregon Chub Conservation Plan in 1992. The Oregon Department of Fish and Wildlife (ODFW) obtained funds in 1992 from the U.S. Fish and Wildlife Service (USFWS) to assess the current status and abundance of the species. Oregon Chub was listed as endangered under the ESA in 1993, downlisted to threatened in 2010, and successfully delisted February 19, 2015 (Federal Register posting).

How did you and your team surmount those challenges? Our main focus was to identify previously unknown populations of chub, protect the existing/known natural populations, and to reduce the risk of the species’ extinction by conducting reintroductions into secure locations with no nonnatives or threats of invasion within their historical range. To address the issue of altered flow regimes, we worked closely with the USFWS and the U.S. Army Corps of Engineers (USACE) to balance the protection of off-channel habitats and natural flow regimes with the USACE flood control objectives. The USACE also funded studies to assess the relationships between flows released from 13 tributary dams and conditions in off-channel habitats upon which chub rely (temperatures, water levels, connectivity) and fish assemblages (native/nonnative) in these habitats. One of the questions we hoped to answer was what characteristics of floodplain habitats allow native and nonnative fishes to coexist. There are several locations where chub and nonnative fish co-occur in floodplain habitats, but chub abundance is typically lower in these habitats, and nonnatives often dominate floodplain habitats that have been altered (e.g., abandoned gravel mining pits). To reduce the risk of extinction and increase the distribution of the species, we initiated a reintroduction program with strict guidelines to protect the donor population and establish new populations with a sufficient number and diversity of donors to avoid genetic bottlenecks. To date, we established 21 populations through our reintroduction program, which was facilitated by working with the USFWS to develop a programmatic Biological Assessment for reintroductions and a programmatic Safe Harbor Agreement (SHA) for private landowners who agreed to allow us to introduce this listed fish on their properties. Four of the five most abundant chub populations are at reintroduction sites.

How did you and your team manage to obtain the support of landowners, NGOs, and federal and state agencies in this recovery process? Surprisingly, this was probably one of the easiest tasks. We had strong support of most of the relevant state and federal agencies from their early involvement in developing the Conservation Agreement in 1992 (prelisting). After listing, we gained additional support (including financial support) from federal agencies (USFWS, USACE, and the U.S. Forest Service [USFS]) in the process of fulfilling their obligations under the ESA. In many cases, NGOs, including land trusts and watershed councils, came to us to see how they could participate. We also had support from many landowners due to their involvement in the Farm Bill conservation programs and the focused activities of USFWS private lands biologists to encourage involvement in the chub introductions/recovery. As time progressed and we started to show progress towards downlisting and delisting, many more agencies and landowners joined in and contacted us to see how they could participate.

Did you have any sense of an anti-government or anti-conservation attitude among landowners? If so, how did you and your team allay those fears? Not much. Part of that may be reflected in the liberal demographic in the Willamette Valley. Fortunately, the recovery of Oregon Chub had very little to no regulatory impacts on landowners. Existing laws (clean water, fill, and removal) were adequate to protect their habitats. To allay fears from landowners who voluntarily agreed to allow us to introduce chub onto their properties, we worked with the USFWS to develop the SHAs with landowners (individually, and later, as a programmatic agreement), which provided them with protections against future land use restrictions and an option to opt-out in the future (none opted-out).

Who else was instrumental in the Oregon Chub recovery? Brian Bangs of ODFW, who started as a seasonal field biologist on the project, took the lead role in the monitoring and recovery efforts when I shifted more of my focus on the recovery of other threatened, endangered, or rare fish species in the desert of southeastern Oregon and elsewhere in the state. The USACE’s Greg Taylor, who has recognized the USACE’s legacy role in altering and impacting Oregon Chub and their habitats, worked to manage flows and temperatures to more closely mimic natural, pre-dam conditions, and provide substantial funding to conduct our detailed floodplain studies to improve our understanding of floodplain processes, the impacts of the project management, and the USACE’s relationship to the fish and wildlife that utilize these habitats. Chris Allen, Rollie White, and Paul Henson (among others) with the USFWS played a large role in promoting/facilitating recovery efforts, protecting Oregon Chub habitats by guiding consultations via their staff, developing a programmatic Biological Assessment to facilitate chub introductions, developing the SHAs to streamline landowner agreements for introductions, providing funding for research and monitoring, and coordinating the annual Oregon Chub Working Group meetings. Countless other agency personnel from USFWS (private lands biologists, refuge managers and staff, etc.), USFS, Oregon Parks and Recreation, Oregon Department of Transportation, National Resources Conservation Service, ODFW district biologists, Bonneville Power Administration, as well as NGOs including watershed councils, McKenzie River Trust (who purchased large expanses of chub inhabited floodplain habitats in the McKenzie River drainage), tribes, and colleagues/collaborators at Oregon State University were fundamental in their support. And certainly we want to acknowledge the numerous private landowners who granted permission for us to access their properties to search for chub, monitor chub if/when they were discovered, and to those who allowed us to introduce a listed fish on to their property.

What university education components or experiences most prepared you for your career? I received a B.S. in wildlife management (fisheries option) from West Virginia University in 1980 and a M.S. in fisheries from Michigan State University in 1982. The broad course work I gained from these degrees gave me a comprehensive view of ecosystem processes and species interactions. I also gained the understanding that you need to step back and take a broad view of each situation, including the biological, social, and political aspects, in order to improve your chances of success. I learned the value of collaboration with individuals from diverse scientific backgrounds and the nuances of working together with private stakeholders (commercial fishermen for my M.S. thesis project and private landowners for various other projects) to instill their ownership/buy-in with the projects a fisheries professional or scientist needs to try to implement.

What are the next fish recovery challenges in your sights? We (ODFW, BLM, the Nature Conservancy, and USFWS) are close to recovering the Foskett Speckled Dace Rhinichthys osculus ssp. in the Warner Valley of southeastern Oregon, and the Borax Lake Chub Gila boraxobius in the Alvord Basin (southeastern Oregon). The Foskett Speckled Dace population now exceeds 25,000 individuals, and the BLM has acquired the lands and restored open water habitats that they use. We have been monitoring the Borax Lake Chub for nearly a decade, and it was recently proposed for downlisting, from endangered to threatened. Additionally, we are working with private ranchers to improve passage at irrigation structures to reduce fragmentation of and work to recover the Warner Sucker Catostomus warnerensispopulations in southeastern Oregon. We are also developing a decision support model, in conjunction with Jim Peterson (Oregon State University/U.S. Geological Survey), to prioritize future nongame fish research in Oregon. Ideally, we will identify at-risk species and can prevent them from becoming candidates for an ESA listing.

What monitoring will be implemented to determine status and trend in Oregon Chub populations? We will continue to obtain mark-recapture abundance estimates for Oregon Chub for the next nine years as part of the USFWS Post Delisting Monitoring Plan. We will also continue to search for additional, previously unknown chub populations in the Willamette drainage. These efforts will be lead by Brian Bangs. Oregon Chub Oregonichthys crameri is a small, floodplain, minnow endemic to the Willamette River basin in Oregon. The species inhabits floodplain habitats including sloughs, backwaters, and beaver ponds. The Oregon Chub was listed as endangered under the federal Endangered Species Act (ESA) in 1993.